skip to main | skip to sidebar
Hello there!

If this is your first visit here, please go to my blog's new home, here. You will find more updated posts and if you are lucky, I might just be running a giveaway :-)

If you have been here before, welcome back! I have moved to self-hosted Wordpress, so now you can find me by just typing www.theunlikelyhousewife.com in your browser. I hope to see you there!

P.S. This blog's comment are now closed. One more reason to visit me on WP ;-) 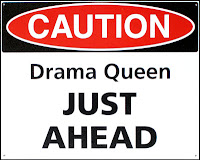 This was supposed to be a different kind of post. I had it all worked out - it was going to be called "Geekdom: the Final Frontier" and talk about why ComiCon is weird and awesome, and all the fun I had there. But I can't write that post. Because this morning, instead of going to ComiCon, I had a mini-meltdown. About what, you may ask. Which brings me to the title of this post. The time has come to address something that I haven't discussed openly, but most of my friends already know. No, I am NOT coming out of the closet. And no, I'm not pregnant (baby dust deflector - activate!) So what just what the heck is wrong with this bloody drama queen?

This summer (at the end of July, to be precise) my family and I will be leaving The Empire State and The City That Never Sleeps to return to The Great Land of Cheese and Chocolate. To stay. For a while, at least.

We knew this was coming and we knew it would be in 2009. Was I hoping we'd stay longer? No. But our first year and half here was much more stressful than I expected; having moved so many time before, I expected the move to be a breeze. Of course none of my previous inter-continental moves included children. But Sarah always had a remarkable capacity for adaptation, and Stella was just a baby, she's get used to whatever as long as we kept her routine in. Heh. "Wishful thinking" is such an understatement.

That year and half was the longest ever. Sarah was having trouble at school, Stella wasn't sleeping. And I don't mean "she woke up every 3 hours to eat" not sleeping, she really wasn't sleeping. Not during traditional sleeping hours, that is. I became a monster. Saying that I was crabby was such an understatement that I could hardly use that word. And you know I don't curse on this blog, but I truly became the bitch from hell. The fact that the lack of sleep was messing up my (sensitive post-partum) metabolism and I gained a bunch of weight didn't help, either. I had lost all my pregnancy weight, only to gain more here.

Anyway... at some point, everyone got settled. Sarah's trouble were handled by moving her to a new class less replete with snobbish queen bee wannabes, and Stella started sleeping a little more. I swear the first night I slept 6 hours in a row I woke up in such a remarkably good mood that I sounded like freakin' Mary Poppins.

That's when I started building my life here, so to speak. I made more friends. I started attending events more, like Here Comes the Sun, Shecky's GNO, SELF Workout in the Park, openings (yoga clubs, stores, etc), and so on. I started blogging. 2008 went by so much faster than 2007 had!

And now that I feel I have a life here, now that I fell in love with New York, now that I look forward to spring to take my daughters to Central Park, now that I got used to having a million places to choose from as destination for date night... I always have the moving date looming on the horizon*. I guess I could be very carpe diem about it, enjoy my time here more because I know it's about to end, but somehow it doesn't work that way. Somehow every fun thing I do, every time I see my friends, every event I attend, at the end of the night I feel sadder to go than I did before. And I've tried to keep Zen about it, tell myself I'm ok, that this is not so bad, that it's not a big deal at all.
And then this morning it all came exploding out of me, and left me drained. For a while.

And once I snapped out of it, I realized that I do have to be Carpe Diem about this. And I may have missed ComiCon, but I'll be damned if I'm going to miss BlogHer. I don't care if I have to get off the plane from Chicago only to board the one to Zurich.


*There's more about going back to Switzerland than leaving New York. There's the fact that I'm Italian. I'm naturally perky. And they are Swiss-German. They are naturally grumpy. They march down the street like soldiers when when they are going shopping. They don't smile at children. The speak German, which ok, is enough to put anyone in a bad mood ;-)

Posted by Elisa @ Globetrotting in Heels at 10:00 AM

German, such an angry language! lol!

Well look at it this way - some people just want to visit NY, you got to LIVE there. And other exciting places to boot! Who knows what the next adventure is?

(I was totally dazzled the first time I got 6 hours of sleep after X was born, too. I think it was last week...)

At least there is chocolate....

Well, I'm a wanna be Zen like person, but frankly, I'm just freakin' pissed off for you. It isn't fair and it sucks.
Okay, I'm a little bit saying that because I haven't had the chance to meet you yet and you're already leaving. But, I also know what it's like to move around often and how the adjustment just sucks up time that you would have used otherwise if you hadn't needed to adjust in the first place.
I'm sure you will enjoy the time you have left, maybe more than you would have otherwise. And, maybe the adjustment back will be easier...
Maybe I'll actually make it to BlogHer this year after all...

Babes, I know the feeling. I have meltdown's too. It's ok. I'm here for you whenever you need someone to listen. I've been there, did the Zurich journey, yes it can be tough, but there are a lot of amazing things about the place too (I miss the healthcare like something chronic!! -Norwegian healthcare is great, but the Swiss, they know how to do it 110%)
It's tough, because I see a lot of me in you (and vice versa), as in we are indeed citizens of the world, and have travelled a lot and are very out going, and Zurich can tend to be a bit depressing at times. However, trust me, places change, and even the Swiss aren't immune to the cosmopolitan changes and influences touching their borders. And trust in no time, when you are back there, you will be enjoying things all over again. And (added bonus here) you can always fly around Europe (for nothing!) and come visit us in Oslo! yay! :-)

Hope your Carpe Diem-ness kicks in, and you're able to enjoy NY while you're there.

I feel so bad for you! Just when you were gettin' your groove on!! I hope things are looking up soon and I hope you continue to blog once you are in Switzerland. They DO have great chocolate!!

Wow-- I'm so confused though since I just started reading your blog-- are you American? Are you from Italy? Do you an "about page"? I need more info!

Blog of the Day